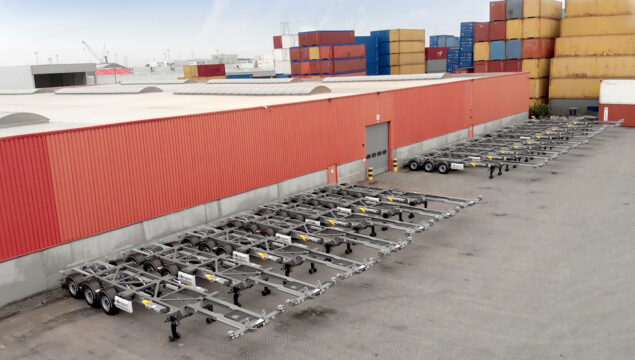 We can safely say that as a transport company, Transport Th. Wouters’ digitalisation is already quite advanced. For example, in all trucks of the Antwerp-based company, there are on-board computers linked to the company’s planning module and ERP system. In the context of rapid developments, extra attention to digitalisation is desperately needed to work as efficiently as possible. “Two years ago, we drew the modal shift map and started using inland rail and waterway terminals to transport maritime containers to and from the European hinterland. At the same time, we also started with nightly transport operations. Both processes considerably increased the complexity of the transport planning and made a radical switch towards detailed digitalisation indispensable.

To this end, we expanded our fleet by 20%, from 26 to 32 trucks. In the meantime, half of the fleet is deployed at night in order to avoid traffic jams during the day, both at the container terminals and the Antwerp ring road. As a result, sales have increased by about 60%. Thanks to this modal and time shift, we now handle a considerable number of additional orders. At the same time, the extra administration has been reduced because the processes are handled more efficiently with digital technology,” explains Garmyn.

Last summer Transport Th. Wouters decided to equip all its container chassis with Sigfox GPS trackers, which are linked to the on-board computers and underlying ERP and TMS system. The Hydrogen trackers monitor the location of all 80 container chassis.

In addition, Oxygen Bluetooth tags have been installed on the tractors, and recognise which chassis is connected to which tractor. “The main reason for using trackers was that in the past, we often didn’t know which chassis were available. Another annoying issue was that we didn’t have enough control over the specific use of ‘genset chassis’ for reefer containers. Our dispatchers were often spending more time taking inventory of the available equipment than in organising transport. We wanted to solve these issues by using trackers. With trackers and tags Transport Th. Wouters now organises their transport more efficiently.

Import or export containers can immediately be assigned to a free chassis, after which drivers can prepare the journey in the planning module (TMS). Drivers receive work instructions on their tablet. Subsequently, the order progress is fed back in real time to the system at the head office.

The time saved by using trackers is difficult to quantify. We do notice that planners can concentrate much more on their core tasks, which is efficiently planning transports. The fact that they no longer need to search for available chassis makes life much easier,” Garmyn adds.

For the chassis recognition project, Transport Th. Wouters  initially contacted various parties. “With Suivo, it soon became clear that we could easily link the trackers with the on-board computers and our ERP system. That was also the main reason for choosing them. The supplier also had a lot of experience with chassis recognition, which allowed Suivo to submit links with various other TMS suppliers. That smooth connection was also crucial to us. Of course, we also took into account the technical specifications of the trackers, such as battery lifespan,” Garmyn adds.

In the meantime, Suivo has also been integrated into the monitoring system that Transport Wouters uses. As a result, the dispatchers now have a dashboard that makes the trackers visible in real time in the planning tool. This way they can see at a glance which containers are on which chassis, not only on our own yard but also at the premises of regular shuttle clients of Transport Th. Wouters, where 15 to 35 chassis are constantly in use.

The tags are also used for chassis that are rented to extend the capacity during peak periods. “Now that have a much better view of available chassis, we ultimately have to rent less of them. It’s reassuring to know that we never rent more chassis than necessary. It’s also useful that the tracking software automatically sends a notification when a chassis does not move for more than 48 hours,” says Garmyn.

An additional advantage is that Transport Th. Wouters now knows exactly which driver has driven which chassis at what time. This allows for a better follow-up of claim files like, for example, bare tires, broken mudguards or broken container twistlocks. It lets Transport Th. Wouters make drivers more accountable, which leads to less damages and costs. The visibility leads to on-time servicing and technical inspection of all chassis.